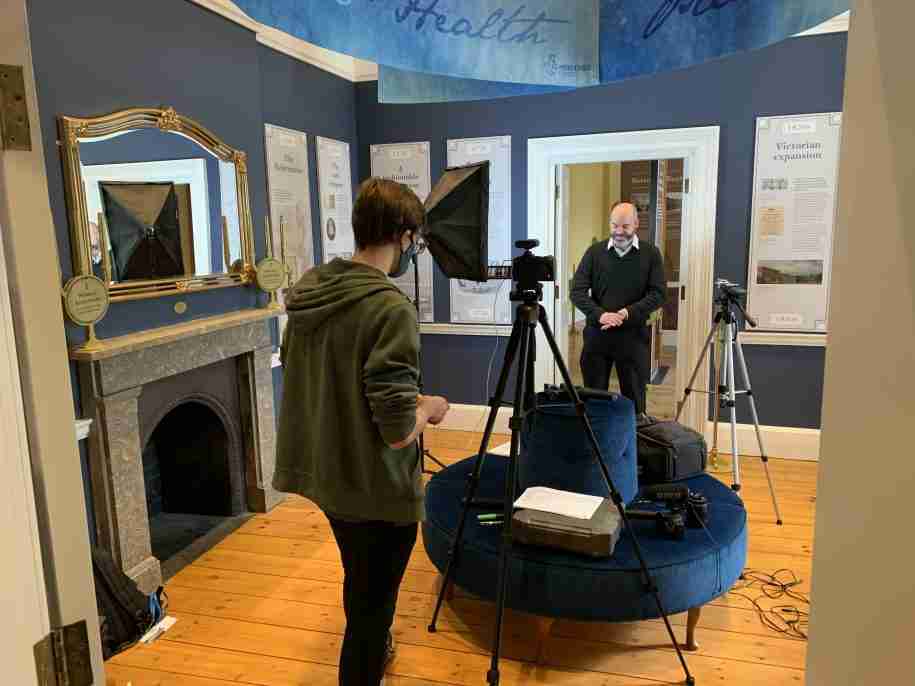 You might think that a teenagers life is made up of studying, playing video games and hanging out with friends – but not for one young local filmmaker. At just 18, Aidan Rhode from Buxton is carving out quite a career for himself, already gathering an impressive CV many aspiring young creatives would dream of.

So when Buxton Crescent Heritage Trust were looking for a filmmaker to shoot scenes for our brand new Virtual Assistants in the visitor experience (not yet seen by the public), Aidan immediately sprung to mind because of his work last year with both Buxton Museum and The Green Man Gallery.

“We were looking for someone with good filming experience but also someone local and up-and-coming, and looking to build up their CV. Aidan was recommended to us and we’d spotted some of this brilliant work online,” says Scott Russell, Education Development Manager.

As Aidan set about filming in March 2021 we began to find out more about this rather talented young man. It’s safe to say his maturity, drive and ambition is pretty inspiring for someone so young. “Age is just a number and success can come at any age, I started messing about with filming gear and filmmaking at the age of 11, it’s gone from there really and now I can’t imagine doing anything else” said Aidan.

When the Visitor Experience reopens in May, visitors will be able to use the Virtual Assistants, a co-production with multimedia company Widesky Design, to help them navigate their way round the nine rooms as they explore. “People in Buxton have talked about the Crescent for as long as I can remember. So to be asked to work with the Trust and finally go inside what is one of the towns’ most iconic buildings, that was amazing! My favourite thing has to be the VR headsets – a balloon ride from Winnats Pass to Buxton, wow. It can be really hard to do things like that well with the level of technology involved, but this was impressive. The attention to detail in the whole thing is extremely well done,” said Aidan.

Aidan certainly grasped the opportunities that technology and breakthroughs have given to him. He’s already worked with BBC Salford, making a short film for the British Film Institute, working as a production assistant with the company who made Frozen Planet, producing instructional films for the National Citizen Service (NCS) and working with local organisations such as Buxton International Festival and REC Youth Theatre.

Having grown up in a world where technology is advancing every day, and never actually knowing a world without social media, mobile phones or computers, he’s taken full advantage of this, now becoming an expert in his own right in the filming field, and subsequently called upon for his opinion.  Aidan has become a regular guest on Radio Derby in the last year and his Youtube channel continues to grow where he shares his own personal filming projects. In January 2021, he was thrilled to be asked to joint-host The Creativity Conference, which was originally due to take place in Iceland but because of the pandemic the event took place online. “This was hugely exciting to be involved. The conference features many highly respected people in their field and some of the best filmmakers out there,” said Aidan.

You can already see what lies ahead, there’s an ‘influencer‘ in the making here.

So, plans for the future? Aidan is heading to university to study Geography later this year and plans to continue with filming work and other different projects. “I still want to keep my hand in where I can. Especially with local organisations in Buxton,” said Aidan.

Buxton Crescent Heritage Trust want to offer opportunities where they can to young people, after such a devastating year following the pandemic. The trust has already taken on an apprentice, Alfie, and Izaak has just joined the team as part of the new UK Government Kickstarter scheme.

“We’re really keen as an organisation to support young people – they’ve been hit particularly hard by the pandemic with less jobs and less opportunities around. Getting Aidan involved was brilliant and we’re really pleased with how the Virtual Assistants have turned out. He was thoroughly professional to work with. We’re hoping there will be more opportunities in the future for young people to work with us too. They are the next generation and it’s always interesting to see how they approach things, in particular technology!” Says Louise Cross, Executive Director of the Trust.

We are grateful for the hard work of the team at Widesky Design for producing the Virtual Assistants.

With special thanks to the generosity of our funders below!