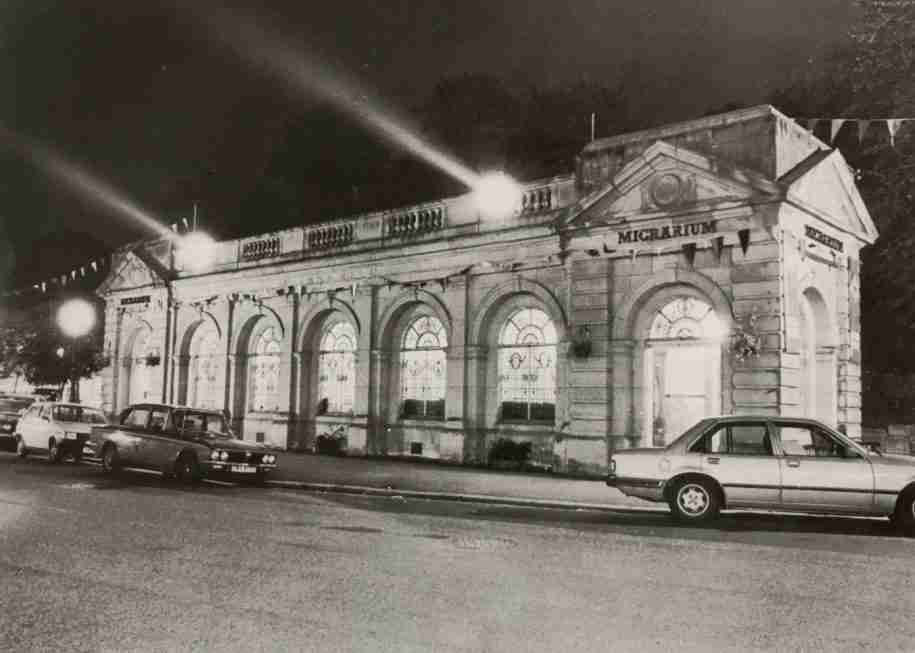 Posted by Buxton Crescent Heritage Trust on May 28, 2021 | Featured

The Grade II listed Pump Room, now Buxton Visitor Centre, has a varied and interesting history, serving the town in a variety of ways over the years. The building was initially used for a place to ‘take the waters’ in Buxton’s hey-day as a spa town when hydrotherapy spa treatments were the height of fashion with health conscious Victorians. By the 1950s the spa industry had stagnated and Buxton was establishing itself as more of an entertainments centre while the Pump Room was used as an information centre.  In the late 1970s it was then redeveloped as Buxton Micrarium (opening in 1981); a place where microscopic organisms and geological specimens could be studied by the public.

As the world’s first micrarium – its exhibition display was devoted entirely to the natural world under the microscope. Buxton Micrarium immediately obtained an enthusiastic following. Micrarium which means a ‘place for small things’ was the dream of the late Dr Stephen Carter who, prior to taking early retirement, was a senior research scientist with ICI Pharmaceuticals. The microscope given to him on his seventh birthday almost certainly determined the course of the rest of his life. Having qualified in medicine, he went to Ghana where he was the only pathologist in the country at that time, and he carried out a major clinical trial into the effectiveness of a new anti malarial drug. This lead to an interest in pharmaceutical research and his subsequent career at ICI. Carters interest in the microscopic world grew over the years having been fascinated as a young boy by what his microscope revealed. His wife Janet said he had always wanted to share the thrill of seeing minute animals, normally invisible to the naked eye.

Retirement at 50 years old gave Carter the chance to realise his ambition and his entire family became involved in creating his vision. His wife Janet and their three daughters set about the design and construction of 50 microscopes; a huge undertaking, which took them two years in the workshop in their home.

Upon opening in 1981, the attraction won its first award from the British Tourist Authority in their Come to Britain awards for ‘Outstanding Tourist Enterprise’. It became a regular attraction for school parties, was featured on television several times and in 1985 were runners up for the Museum of the Year in 1985; with the £500 award they bought a computer/word processor – which must have been quite a thing back then.

Among the 350 or so exhibits, there were around 30 different live specimens taken from ponds locally. Every morning before opening to visitors, staff would spend around 45 minutes checking on them, topping up water supply and replacing if necessary. Upon entering the attraction, visitors were greeted by pools of light – the projected images of microscopic specimens, many of them living organisms.

Each of the 50 remote controlled microscopes had the facility to change focus, magnification and an information display and were designed to give sharp images and a wide field of view – which for the time was impressive, especially given that Carter had designed and built these himself.

As a ‘hands-on science centre’ as Carter described it, the micrarium was a place of wonder that gave the public the chance to experience the microscopic world like never before. By 1987 they were seeing 40,000 visitors per year charging a very reasonable £1.50 to enter (80p for children) – roughly about £4 today.

Sadly, Dr Carter died suddenly in 1987 and whilst part of his family carried on running the exhibition, in 1995 closure became inevitable when the lease on the premises expired and no suitable home could be found. In the 14 years it was open in excess of 250,000 people visited.

For anyone who remembers its dim interior and fascinating windows into a microscopic world, this image will be a welcome reminder of a time when Buxton had a tourist attraction that was truly remarkable.

In the years following the closure of the micrarium, the Pump Room was occasionally used by the High Peak Artists’s group for art fairs. Artists were able to sell their work at these events raising their profile and the group went on to have a permanent exhibition, Gallery in the Gardens, in the Pavilion Gardens. Today, the Pump Room is now home to Buxton Visitor Centre, which opened in March 2019.

Source: With thanks to Explore Buxton and Dr Patrick Harkin, MBChB, BSc(Hons), FHEA from Leeds Institute of Medical Education for sharing the paper ‘The Development of the Micrarium’, written by Janet Carter in May 1988.